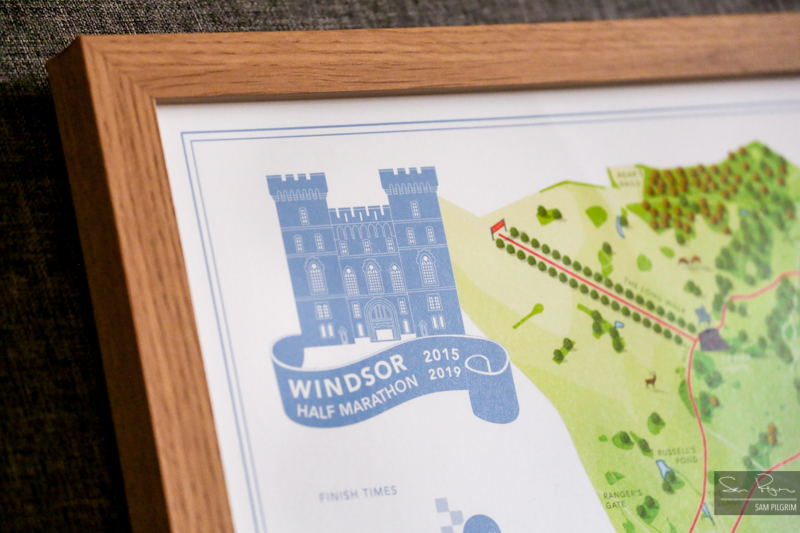 I recently produced a personalised illustrated map of the Windsor Half Marathon route as a gift for a family member who's run it for several years in a row, but who naturally missed out on the 2020 event.

The map shows the race route as it winds its way through Windsor Great Park, with illustrated details picking out key features in the park, alongside hill profile and finish time data visualisations.

The Windsor Half Marathon

The WHM is a double-loop around the leafy grounds of Windsor Great Park, a couple of miles outside of Windsor itself. The route starts on Long Walk - an arrow-straight tree-lined avenue that runs south from the castle.

It swiftly climbs up Snow Hill (the ascent punishing those having started too fast!) and first follows a 4 mile loop past the Royal Lodge (Prince Andrew's digs), the Royal School and the scattering of cottages imaginatively named "The Village".

Runners again pass under the Copper Horse, a statue of George IV atop Snow Hill, before knuckling down for the longer 7 mile loop that skirts the edge of the polo fields and Savill Gardens and glances off the top of Virginia Water lake before heading north again. The final mile back along the Long Walk always seems to stretch on forever.

I've lived at the edge of the park - on and off - for many years, and run many miles around it, so it's an area that's especially familar to me. I ran the route myself in 2008 (my first race!), clocking in at a reasonable 1:45:15, despite walking for a stretch.

I actually did run a faux-WHM in the autumn of 2020 - with some slightly adapations to the route due to private roads - although barely eeked out a 2hr finish. That might have been partly due to the fact I'd just cycled the 3+ hours from Oxford to Windsor. And then I cycled back again afterwards. The things we do for fun...

The underlying map is based on Ordnance Survey (OS) and Open Source Map (OSM) data, lightly processed in QGIS, with most of the heavy lifting and graphic work done in Adobe Illustrator.

I brought in datasets for elements such as roads, water bodies and forests, cutting down extraneous elements and clutter. There's beauty in a map rich with roads, icons and shapes, but this was certainly a case of 'less is better'. For example I removed a whole lot of really small ponds and pared back on paths and roads, just using negative space between green forested areas to hint at tracks and letting the highlighted route spring to the foreground.

I also introduced height data from OS, with transparent layers forming faint contours, as well as exploring some manual hillshading/relief techniques in Photoshop. Petrichor and Relief shading have some great posts and videos about these techniques. Obviously the terrain lacks the dramatic changes in altitude of, say, the Rockies or the Cascades (!) - but using contours alongside gentle shading worked well at bringing in suggestions of elevation.

The heading graphic of Windsor Castle is based on the 2015 medal - a hefty chunk of metal that's a far sight prettier than all the WHM medals since!

Inspiration for the map came from a number of sources - including the work of Owen Delaney and Dan Bell, both runners and skilled mapmakers - do check out their work.

I'm also a big fan of the semi-3D, illustrated style used by other designers such as Mike Hall and many others. I played a little fast and loose with scale, using small details such as the trees, deer and statues to add graphic interest and suggestions of forested areas. I had great fun drawing these illustrations - although I may have got carried away in the detail, given the size at which the map was to be printed!

I printed this map as a Giclée print on Hahnemühle Pearl to leave the background a bright neutral white, and to bring out the vibrant greens. It's not a cheap method of printing, but it's really worth iti for the colour reproduction.

Are you interested in a custom map? Have you run the Windsor Half or another race that you'd like to capture in a design like this? Drop me a line and we can chat!