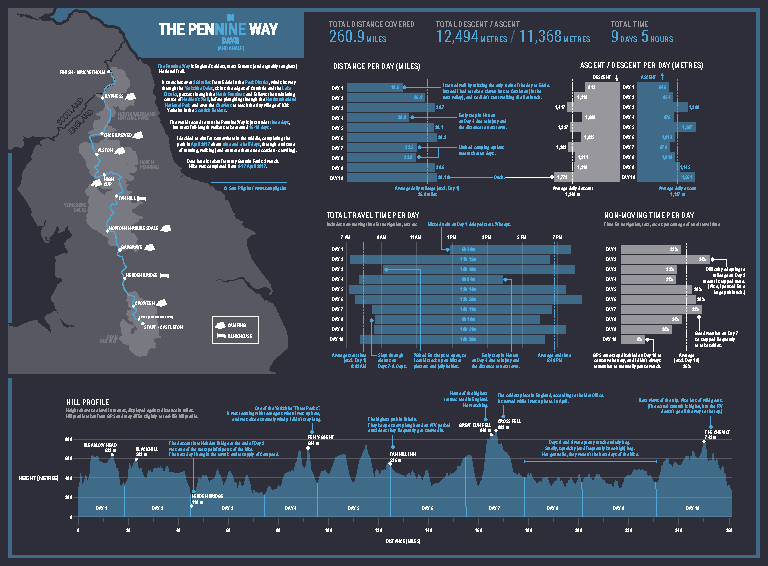 In April 2017 I completed a solo, unsupported fastpack* of the Pennine Way in 9 (and a bit) days.

Having never attempted a hike longer than 5 days before (and never a solo trip longer than 2 days), not to mention that most hikers take 16-19 days to complete the Pennine Way, I knew beforehand it was going to be something of a challenge. But with my first fell ultra marathon lined up for later in the year, and with daydreams of exotic through-hikes like the PCT forever invading my thoughts, I wanted to see what I was physically (and mentally) capable of. Would one of my never-ending running injuries force me to stop? Would I go mad hiking alone? Would I just get bored?

At times, it was horrendous. I injured one knee, both achilles tendons, one ankle and a thumb. On one day I got sunburnt, and on another I became concerned about hypothermia. I developed the largest blister I've ever seen, and nearly lost my shoe in a knee-high bog.

But it was also brilliant. I was blessed with fantastic weather (on most days) and incredible views. I climbed hills I'd never heard of, saw Hadrian's Wall for the first time, and stayed at the highest pub in Britain. I ate the best friggin' chips I have ever had (in Hawes - if you've been there, you'll know the chippy I mean), and I discovered the magnificent thing that is calorie deficit (seriously, I was constantly stuffing my face with pork pies and jelly babies and I still lost weight). And I discovered that I wasn't totally terrible at (and actually quite enjoyed) this fastpacking lark.

At a later date I might write up some of my experiences / thoughts / lessons learnt, about things like gear, nutrition and foot care. But for now I'll just leave you with an infographic I put together with various bits of data I recorded on the trip.

Some of the data is more interesting that others (e.g. I'm particularly intrigued at how much time per day I wasn't running/walking!), and some of it is just pretty (gotta love a good hill profile), but either way - enjoy!